For over a century, Ursuline has been the Mahoning Valley’s premier private college preparatory Roman Catholic high school, providing a storied tradition of spiritual, academic, athletic and arts excellence.

Over a Century of Service

to the Mahoning Valley

At the turn of the century, Ursuline High School began her service to the ministry of Catholic Education as a simple day school for girls on West Rayen Avenue. With an initial enrollment of 25 girls, the Ursuline Academy of the Holy Name of Jesus was founded, the predecessor of today’s Ursuline High School. Mother Vincent O’Connell was appointed the first principal of the Academy. The original curriculum stressed classical studies, language skills, doctrinal religion, and strict discipline.

In the years following World War I, Youngstown, Ohio, witnessed an unmatched period of growth and prosperity. Likewise, the Academy flourished and outgrew its Rayen Avenue convent building. The Chauncey Andrews Estate was purchased in February 1919, thus beginning the “Wick Avenue Era.” The Ursulines began a fundraising drive almost immediately upon moving into the Andrews Estate to build a new school that could accommodate 400 students. Groundbreaking was held in 1924, and in April 1925 the student body moved into a three-story brick building on Bryson Street. 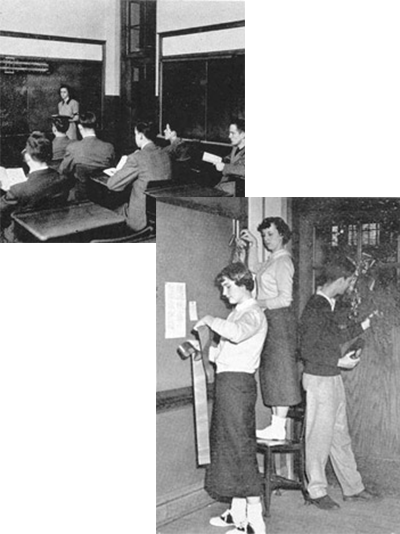 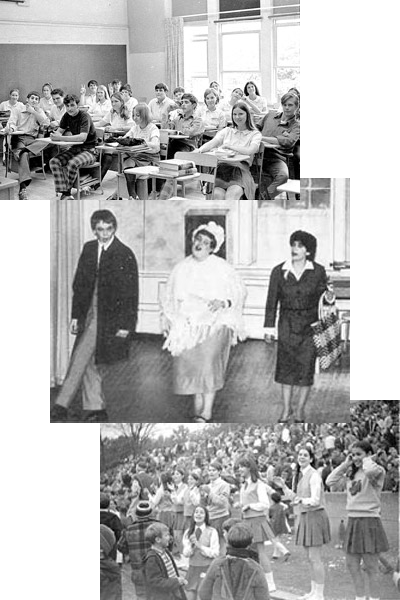 In 1922, the school was affiliated with the Catholic University of America. In 1927, Ursuline was admitted to the North Central Association of Colleges and Secondary Schools, certifying the quality of the program the Sisters had organized since the Academy’s early years.

Many institutions struggled for survival or closed during the Great Depression. Ursuline, however, was pro-active and planned for a new kind of school – a co-educational facility. Boys were admitted in 1930 and the Academy became officially known as Ursuline High School. As the 1930s drew to a close and the United States engaged in the tumult of a world war, Ursuline High School’s fledgling programs were beginning to thrive under the patient and powerful leadership of Father Joseph M. Gallagher, beloved principal. Not only was excellence encouraged in the classroom but in extra-curricular activities as well. A full-sized band was organized and Ursuline took her place beside other city high schools in the City Series Athletic Conference. Enrollment continued to rise. A record student body of 622 in 1942 was surpassed the following year by an enrollment of 710. After only four years in the Conference, the Fighting Irish Football team ended an unbeaten season as City Series Champs under Coach Cy James. Possibilities seemed unlimited at Ursuline High School when tragedy struck. In January 1946, Father Gallagher was killed in a car accident on his way to offer Mass for the Ursuline Sisters at Rayen Avenue, leaving the school community shaken.

Monsignor Glenn W. Holdbrook was appointed principal in 1946 to lead Ursuline at a time when thousands of families in the post-war era enrolled their children in Catholic schools. A diocesan-wide fund drive for new schools was necessitated by enrollment projections that taxed the ability of existing Catholic schools to meet their needs.

In 1953, Bishop Emmet M. Walsh approached the general superior of the Ursuline Sisters, Mother M. Blanche Klempay, with a proposal that the Ursuline Sisters sell the property to the Diocese with the stipulation that the Diocese assume the debt of $102,000 and build a major addition to accommodate the burgeoning enrollment. Furthermore, Ursuline High School would retain the name of the Order in its title, and the Ursulines would remain the sole community of religious women to staff the school.

After seeing Ursuline through a period of enormous physical development and a surge in enrollment, Father Holdbrook left his position as principal to become rector at Saint Columba Cathedral. Monsignor Donald Reagan, a 1940 Ursuline alumnus, took the helm in 1957. He collaborated with Orlando Vitello, the high school music director, and wrote Ursuline’s famous fight song and alma mater. From 1,300 total enrollment in 1960, the academy that once educated only 25 girls accepted 1,729 students in 1963. Ursuline handled this growth well due to the large numbers of priests and nuns who staffed the school. Tuition was only $110 per year in the early 1960s. Athletically, Ursuline dominated the football scene in the ’60s. Under the tutelage of Coaches Tom Carey, Jerry Hanlon and Ed Klein, the Fighting Irish rolled to ten consecutive winning seasons and two City Series Championships. The Ursuline vs. Chaney game in ’64, as well as the Ursuline vs. Mooney game in ‘67 drew standing room only crowds of 15,000 that alumni still recall fondly today.

During the turbulent 1960’s when many standards in academics and discipline were questioned, Principal Father Robert Sabatino held the course that his predecessors had established. A strong academic curriculum, a dress code and religious instruction were mainstays of the Ursuline experience.

Father John P. Ashton, a 1948 alumnus of Ursuline High School, replaced Father Sabatino in the middle of the 1967-68 school year when enrollment reached an all-time high. A total of 1,945 students crowded into a building designed for 1,200 pupils. A record senior class in 1968 graduated 498 students. The trend would change drastically in a few years and Ursuline would witness a gradual decline in population due in part to industry leaving the area and a decline in the available pool of students in the waning years of the “baby boom.” During the Father Ashton era, changes were made in curriculum and scheduling.

Father Ashton was appointed pastor of Saint Luke Parish in 1972 and Thomas F. Carey was named the first lay principal at Ursuline. During Mr. Carey’s 10-year tenure as principal, Ursuline High School saw her last 400-plus graduating class in 1974, and the faculty make-up changed from a predominance of nuns and priests to primarily a lay staff. After completing 36 years of service to Catholic education, Mr. Carey retired in 1982 and was replaced by Dr. Nicholas M. Wolsonovich.

During the Wolsonovich administration, special attention was paid to increased participation in school life by parents, a stricter dress code for all students, and professional accountability for the teaching staff. Dr. Wolsonovich became diocesan Superintendent of Schools in 1985 and Ursuline’s leadership was passed to Associate Principal, Father Daniel M. Venglarik.

As principal, Father Venglarik improved all facets of school. Advanced Placement programs were implemented along with major renovations of the science laboratories, the library-learning center and the gymnasium. The boys’ basketball team won its first state championship in 1994. The Office of Alumni and Development was created in 1985 to coordinate alumni programs, raise funds for capital improvements, and oversee the growth of the Endowment Fund. Alumni were mobilized as never before to secure their alma mater’s place in the community. The Endowment Fund was built to provide students with tuition assistance and for other capital needs. When Father Venglarik was named pastor of Saint Charles Parish in 1995, Assistant Principal Patricia Fleming became the tenth principal of Ursuline High School.

During her years at the helm, Patricia Fleming achieved many goals. In 1995-1996, she oversaw a capital campaign which raised the needed funds to completely renovate the auditorium. Built in 1924, the auditorium served a plethora of purposes over the years, but it is now a beautiful theater and concert hall renamed the Deibel-Morley Arts Center in honor of Sister Rosemary Deibel and Sister Alice Marie Morley. Other capital projects during Mrs. Fleming’s tenure include the renovation of the home economics room into a ceramics classroom, the creation of the meditation garden area, the upgrading of the Lyden Lab and the creation of the Curriculum Lab among many others. The curriculum was expanded to include nine advanced placement courses in calculus, American history, American government, French, Spanish, biology, chemistry, and English. Six state championships were added to Ursuline’s storied sports history: baseball and football crowns in 2000, girls’ basketball in 2004, and additional football championships in 2008, 2009, and 2010.

Mrs. Fleming also spearheaded the school’s year-long centennial celebration in 2005 with a full calendar of events that took several years to plan. The Centennial Capital Campaign, with a goal of $4.5 million, resulted in improvements to the educational program. Five new scholarships were created, the Wick Avenue Gateway lot was purchased and completely renovated, and new lockers were installed throughout the building. At the conclusion of the 2014-2015 school year, Patricia Fleming retired from her position as Ursuline Principal. Assistant Principal Matthew Sammartino was appointed her successor to become the next Principal of Ursuline High School.

During the Sammartino administration, Ursuline High School continues to thrive. With the addition of new Advanced Placement (AP) courses, such as AP Seminar, Computer Science, Drawing, Research, and 2D Design, Ursuline students are given the opportunity for multiple college level courses at the high school building level. Four science labs were completely renovated, as was the Art Room. All are exquisite, state of the art spaces for learning. A 1:1 Chromebook program has been implemented with continued improvements to Ursuline’s education technology program.  Specialized medical and engineering preparation programs have been added to the curriculum.

Ursuline’s place as a major Catholic educational institution in the City of Youngstown cannot easily be replicated. Alumni can be found in prominent roles in medicine, law, education, government and business. Our 14,000 living alumni, current students and families have the opportunity to wed our accomplished century of service in the Mahoning Valley to a future every bit the equal of our past. Together, we celebrate in the grand Ursuline tradition the words of our motto ~ “Soli Deo Gloria ~ For the Glory of God Alone.”

Ever since Ursuline became involved in inter-scholastic sports, it has been known as “The Fighting Irish.” Perhaps it was a natural outgrowth of the association of “Irish” with “Catholic,” even though the Ursuline Order was founded by an Italian nun and established in this country by the French.

However, in the late 1930’s our nickname came very close to being changed. Here’s the story. There were some voices of dissent by some of the non-Irish families who resented being referred to as Irish. Therefore, an honest attempt was made to change the name. An ad hoc committee was formed to consider ethnically-neutral names. A compromise was settled upon. An interim nickname would be used: the Irish Terriers.

Father Conry, the principal, gave his approval. The next stop was to inform the Press (the word “Media” had not yet been invented). A meeting was set up with Frank Ward, sports editor of The Vindicator. When told of the proposed change, Mr. Ward said, “Gentlemen, you can use any nickname you want, but as long as I’m the sports editor of The Vindicator, Ursuline will be known as the Fighting Irish.” And, that was the end of the “Irish Terriers.” The Fighting Irish had survived.